This just in from my friends at Tobaccopipes.com–a first look at the 2018 St. Patrick’s Day pipes. Paddy’s Day is still a ways off, but in a sense Paddy’s Day is any day a Pete Nut picks up his favorite Peterson, right?

The Dublin Era (1991 – present) has seen a number of annual comemoratives, including the July 4th, Father’s Day, St. Patrick’s Day, and Christmas pipes. The St. Patrick’s Day pipes began in 1998, and each year I’m sure they scratch their heads in Sallynoggin and try to figure out what to do next. This year marks three firsts for the series: the first army-mounts, the first sterling ferrules, and the first amber-color acrylic stems.

If you watched Tom Palmer’s interview posted a few blogs back, he said Peterson liked to think they’d captured the green, white and orange of the Irish flag this year–something the commemorative did in a more modest way with a triple-ring acrylic band for its first issue in 1998.

As far as shapes go, it appears that Peterson is sticking to a dozen tried-and-true established, smaller Classic Range numbers, including several Pete-lover favorites: the 120 dublin, the 999 rhodesian, the 305 calabash, and the fabulous B10 hybrid. The photo of the flat-bottom 304 isn’t particularly illustrative, but it’s one of Paddy Larrigan’s original designs, a wonderful barrel-“setter.”

The pipes can be pre-ordered at Tobaccopipes.com here in the U.S., and should be out early in the new year.

For those who can’t wait, Tabaccheria Guzzi’s eBay store is offering a few right now on eBay. As you can see from the photos, the finish is something a bit new and different from Peterson. At first I thought it was a matt spray, but I’m not sure at this point. I think I can see a bit of grain beneath the green. I also want to call your attention to the inlaid aluminum P —another indication of the high quality of this year’s release. Note, too, Jason Hinch’s sterling “Hinch Mount” on the 03 and X220.  I’m also excited Peterson is continuing the use of the commemorative sleeve. The laser-engraved shamrock on the laser-stamping is also a nice touch! 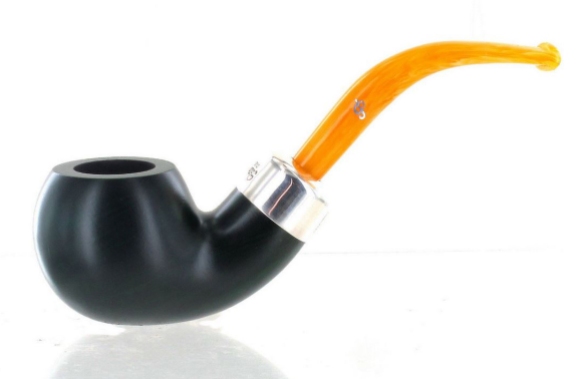