When I attended my first Chicagoland show a few years ago, I had the good fortune to sit next to a gentleman who loved Peterson pipes, and as we began to talk about them and he shared his favorite shapes and lines, it quickly became apparent that he represented what is probably the vast majority of pipemen in the hobby today: guys who don’t buy artisan pipes, guys who don’t pay $200, or even $150 for a pipe, or at least not often. It was kind of disappointing to me that the show didn’t have much to offer us in the way of Petersons (estate or new), as the old swap ‘n’ sell days of estate pipes had mostly been displaced. But he didn’t mind. Like me, he was just glad to be there and be enjoying the company of pipe-minded folk. But he did get me to thinking just how important it is to have good pipes available at prices we can all afford.

The entry-level Kerry line just now appearing at various places on the internet is the latest installment of Peterson’s long-standing commitment to the Everyman pipe-smoker, a commitment that goes back the company’s earliest days. As we discuss in the book, Peterson has never split up its lines as distinct high, mid-, and entry-level marques, and sometimes pipemen don’t know that Peterson does indeed make pipes at every level.

As an entry-level line, however, I’d have to say Peterson has upped their game in comparison with the entry-level lines of the past twenty years. The tri-part brass and nickel band perfectly complements the gold-cream swirl acrylic mouthpiece and its silver hot-foil P. The dark chestnut stain is also a knockout.

The nearest thing in the back catalog to the Kerry line, and perhaps a bit of its inspiration, comes in the 2011 Molly Malone collection, which featured a sterling band and faux-horn acrylic mouthpiece.

The dozen shapes have been judiciously chosen (as you can see below), with a great lineup of solid-smokers in all sizes, both straight and bent. The XL16 shape (seen at the top) is the collector’s piece in the Kerry dozen, and old hands will remember it as the 6th release in the original Sherlock Holmes series as “The Professor” (Moriarity), originally released about 1990. It has been in continuous production ever since, but I don’t think I’ve ever seen it except in the Kinsale series, aside from a few released as army-mounts for the Smokingpipes Arklow line. 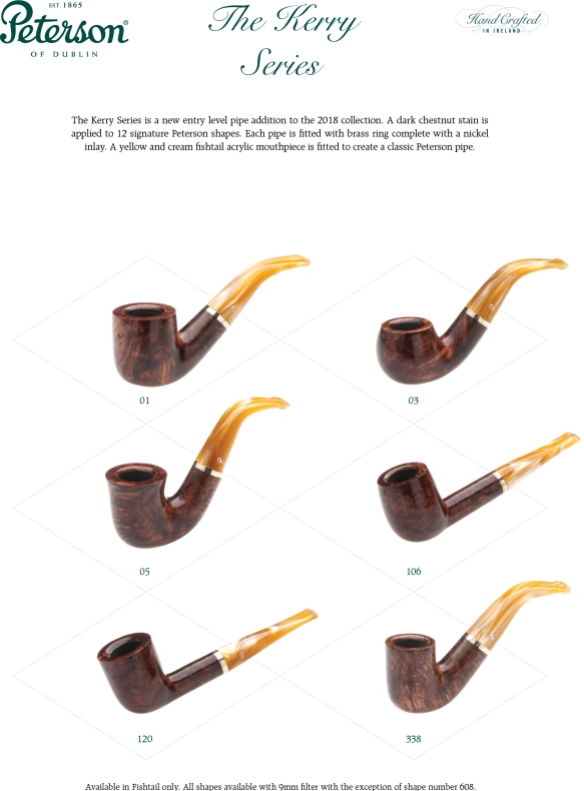 Am partial to darker stain colors and the combination of that stain and the stem coloration is quite striking. I’ve been tempted to get an XL16 for quite some time and I don’t need more temptation.