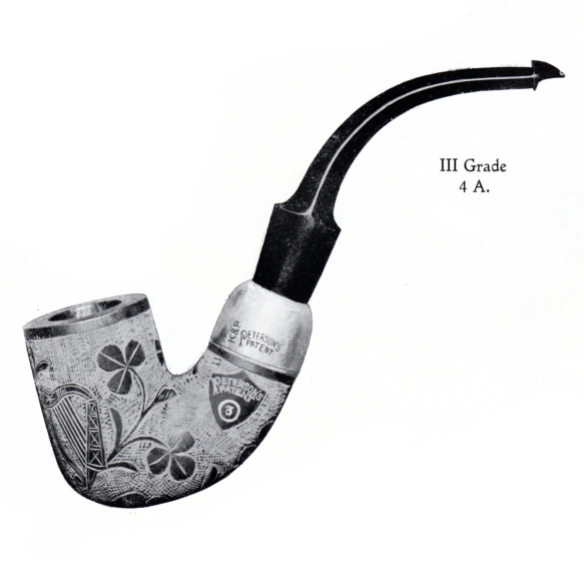 Peterson’s shape numbering system is one of the mysteries we knew we would have to solve at the outset of The Peterson Pipe: The Story of Kapp & Peterson. Even devout collectors like my friend the late Chuck Wright will sometimes scratch their head in befuddlement. All will be revealed, of course, in the book, and I’m in hopes that sellers (and even Peterson) will read the shape numbering section carefully so as to make life a little easier for companioners of these great pipes. But Peterson’s named shapes, while far fewer in number, are just as interesting and mysterious as their numbered ones, in part because their origins have often been lost, even to Peterson themselves. 1

Of course naming a pipe shape is as old as pipes and pipe-makers. In the early days of briar pipe-making companies commonly had different names for the same shape, but over time one name usually took the ascendancy and a shape settled down to just one  name—Dublin, bulldog, and Rhodesian come to mind. Or in some cases, the pipe is known by two names –the Oom Paul (or Hungarian) and the Zulu (often called a yachtsman by the Great Generation).

Bill Burney’s great shape chart for the old ASP is a forceful argument for the usefulness of these names, and I remember in my early days devouring every shape chart I could lay my hands on. Even more recent artisan shapes, once they become common enough, generate a common name—blowfish, volcano, acorn and fig, to name a few. 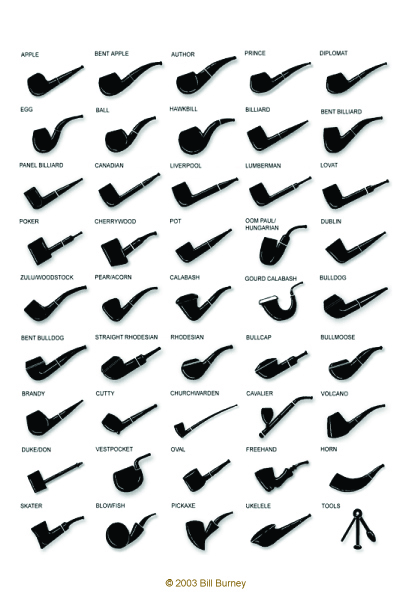 Peterson’s named shapes are found in the very first catalog in 1896 with the Cad or Bull Dog.2  By the 1906 catalog there are over a dozen named shapes, most of which we identify in the book.  Readers of this blog will recall posts on both the Kaffir (now in the catalog as the reproduction B35) and the John Bull (original 999 shape, discontinued in the 1980s).  The shapes are still known in the hobby—the first a predecessor of the Zulu and the second as an author. But there’s something special, I think, in knowing what K&P called them.

Peterson had some fascinating names for their shapes early-on, and continued to name a few of their shapes throughout the twentieth century: the Large Bolton (shape 50, 1947 shape chart), the Bent Albert (shape 268, 1947 —what we call a Zulu), the Medium Squat Cad (shape 495 in the 1947 chart—one of Linwood Hines’s favorite shapes).  Then there’s the Tankard and the Barrel and the Calabash and the Belgique, a quartet or set of twins that appeared in the mid twentieth-century.  After that, we have to fast-forward to 1981’s Mark Twain for a named shape and the incredible outpouring of special collection pipes which followed, most of which all have names before entering the numbered B shape chart. The only example of a named shape with no number since 1981’s Mark Twain is the Large Tankard, which, appropriately enough, appeared as a companion piece in the 2010 reissue of the Mark Twain.

But the shape name I want to focus on here, as it is well outside the scope of the book, is the Bent Dutch, sometimes called (but not by Peterson) a Dutch Billiard. The 1896 catalog simply referred to pipes with this shape as “Straight Bowls.” In the illustrations you can see they were available in a larger and a smaller size (top and bottom row) with four different shank angles, making eight unique bowls:

The Four Sizes of 1896 Straight Bowls, in Different Mounts 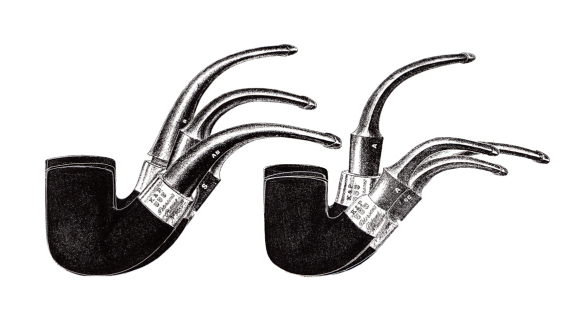 For those with eyes to see, it was this shape family that was featured in the ubiquitous engraved version of the Thinking Man, where it appears as a 4s. But while it had a shape number by 1906, it wasn’t given a shape name in Peterson ephemera until the 1947  chart, and then it’s as the “Bent Dutch” for shapes 337 and 338, not the larger 4s / 309, which name would come later.

The 1981 “Mark Twain” point-of-sale brochure takes up the name for the first time after a 34-year hiatus, tagging the 313 as a “Medium Dutch Bent” and the 309 as a “Large Dutch Bent.” The 1983 catalog drops “Bent” off the end of the two shape names, just settling for “Medium Dutch” and “Large Dutch.”  The 1984 catalog added back the bent to the end of each name. The name was used only one more time, shortly after Tom Palmer assumed direction of the company, in the 1992 Hand Made brochure.

[Now you might think System shape 301 (the 01 Deluxe and Classic Range) would be a “Squat Dutch,” being straight-sided, but it’s not. Whoever said life was logical? It’s called a “Large Pot.”]

So now to the name’s origin. As with most of life’s thornier problems, you can approach it with a hermeneutic of suspicion or a hermeneutic of trust—the former being very useful in politics and sophomore logic classes, the latter for any situation requiring metaphor or the larger issues of life.

I recently read online a lengthy, pedantic article attempting to trace the origin of the Oom Paul shape name, and after wading through what seemed like five or six thousand words, the author threw his hands up at the end and said there wasn’t any conclusive evidence to connect the shape name with the South African patriot, President Paul Kruger. Hmm. I suspect the author couldn’t see the forest for the trees, because this is one of those cases where oral history, tradition and myth convey a truth greater than documented historicity.

We’ll be talking at length about Peterson’s fortuitous (and yes, literal) connection with President Kruger in the book; suffice it here to say that there seem to be not two but three Peterson pipes that received names in the Boer Wars: the Oom Paul, the Kaffir and the Dutch Bent.

In an email from Arno van Goor, of www.dutchpipesmoker.wordpress.com, Arno told me: “Likely the name comes from the Boer Wars. The most famous pipe shape name in that regard is of course the Oom Paul. But there was also a similar model, which was smoked by the Boeren (Dutch speaking settlers and their descendants). Irish regiments were fighting for both the British and the Boeren, so perhaps the ‘Dutch’ name stuck there.”3

1901 Dutch Bent from the Boer Wars

When Irish servicemen came back from the Boer Wars, they didn’t have to look far to find the shapes they’d enjoyed—just up on Grafton Street.  You can imagine the conversation between the shop-keeper and the soldier: “I want one that looks like this,” he says, pointing at a pipe in the case, “a Dutch Bent!” The shop-keeper knowingly nods his head, remembering for future reference that customers know the 313 (8s) and 309 (4s) shapes by name. As the old soldiers died off, they passed along their name for the shape to the next generation, but as the years went by, it must have become more and more difficult for anyone to recall why  they called it what they did.

Kapp & Peterson weren’t the only company to made a Dutch Bent, and probably weren’t even the first. But they deserve to be recognized as the most important company to make the shape, to have had it in production longer than any other company, and certainly to have made it uniquely their own since its debut in their 1896 catalog. They’re still found in abundance on ebay, and Peterson has even released a handful this year in several lines–the Killarney, the Donegal Rocky, and the promise of the Derry Rustic to come.

Shown at top:
A Dutch Bent (4s) with Irish Emblems from the 1906 catalog

1 When I recently asked Tony Whelan, Jr., factory manager at Peterson, if he could tell me why the 309 and 313 were called “Dutch Bents,” he replied that neither he nor anyone at the factory had ever heard them called by this name.

2 While it’s never used these days, the “Cad” shape name for what we know as a “bulldog” shows up in a number of pipe catalogs at the beginning of the 20th century. Peterson’s inclusion of both names in the 1896 catalog is of interest here—some customers knew it as a “Bull Dog,” some as a “Cad.” So where did the name come from? Here’s one possibility, from World Wide Words: “Its history is as weird as one might like. The word started life as cadet, either a military trainee or a member of a younger branch of a family. That developed into caddie, now solely a golfer’s bag carrier, but in the eighteenth century any lad or man who hung about in the hope of getting casual work as an errand-boy, messenger or odd-job man. Both cadet and caddie were shortened to cad. Early on — for reasons unknown — it had the sense of an unbooked passenger who had been picked up by the driver of a horse-drawn coach for personal profit. By the early 1830s, it had come to mean the conductor of one of those new-fangled London omnibuses, the man who rode inside to take the fares. Might the job have been one that was taken as casual employment by caddies? My references don’t say. In 1895, George Augustus Sala commented in London Up to Date: “An omnibus conductor, nowadays, would, I suppose, were the epithet of ‘cad’ applied to him, resent the appellation as a scandalous insult; and, indeed, ‘cad’ has come to be considered a term of contempt, now extended to any mean, vulgar fellow of whatever social rank he may be.”

The shift seems to have happened at the university of Oxford. Lads from the town who hung about colleges in the hope of casual work of the caddie type were called cads by the undergraduates. It became a contemptuous way to describe townsmen and by about 1840 it had achieved its full flowering as a term for a man whose behaviour was unacceptable” http://www.worldwidewords.org/weirdwords/ww-cad3.htm, accessed 5/21/16.