Kris and I were emailing a few weeks ago about some Peterson pipes (of course), and he mentioned that at the recent UK trade show Peterson was offering what is probably the last installment of the real amber spigots. Kris told me, “the UK got 50 and retailers were falling over themselves to snap some up. The show opened at 9:00am and they were all gone by 10am. I was the first on the stand and managed to select the 10 best pieces. I then gave other eager retailers a chance to grab some (we are all friends in the trade) and took what was left at 10am.”

When he offered to let me see what Black Swan had received a few days ago, my eyes popped. It’s not just the amber spigots, nor the incredible “A” bowls with their breath-taking birdseye or flame grain, but the combination that is so pleasing. And to see all these pipes together was so remarkable that I thought I’d pass along that experience to you with a minimum of commentary.

Before beginning your tour, I would like to point out a few things about the mouthpieces. Notice as you go along that there are three distinct types of mouthpiece: a round-end with the draft hole in the middle, a flattened button which isn’t quite a fishtail, and a P-Lip. While the 50 kilos or so of amber mouthpieces were inventoried in the late 1930s, the three styles of mouthpieces tell us a little bit more. The orifice or round-end style predates P-Lip production and was abandoned during the 1890s, meaning these mouthpieces were fashioned no later than that decade. The almost-fishtail stems could date anywhere from the late 1890s to the time of inventory. The P-Lips, of course, date no earlier to the time of the 3rd patent in 1898.

We know Charles Peterson and his young hand Jimmy Malone both worked amber, so there is the very real possibility that either CP or Malone actually crafted some of these stems. In the photo session Thomas Mason (the famous Irish photographer) did for the 1906 catalog, CP and Henry Kapp chose the amber and meerschaum work station not only for its prestige value, I think, but because Charles was justifiably proud of his skill as a craftsman. He always chose to wear his workman’s smock in any indoor photograph, while the other execs wore suits (that photo, of course, is in the forthcoming book). 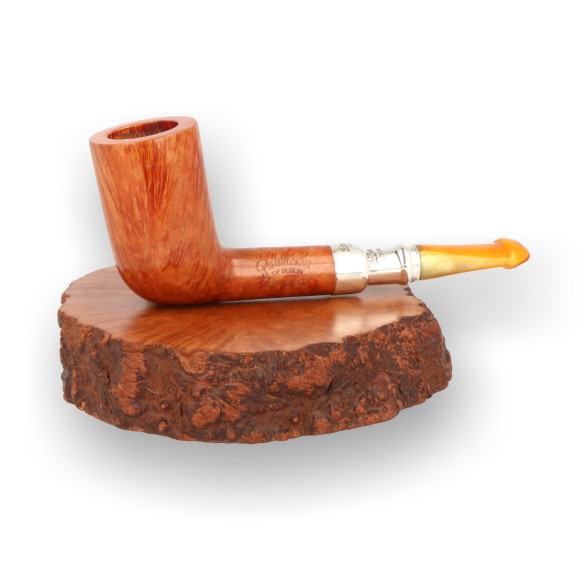 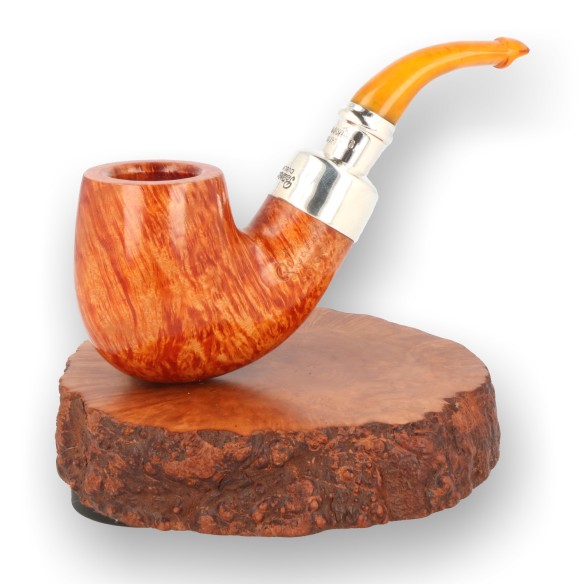 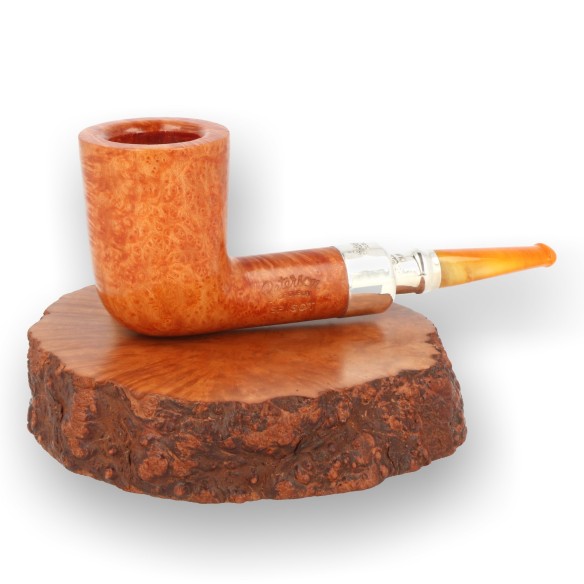 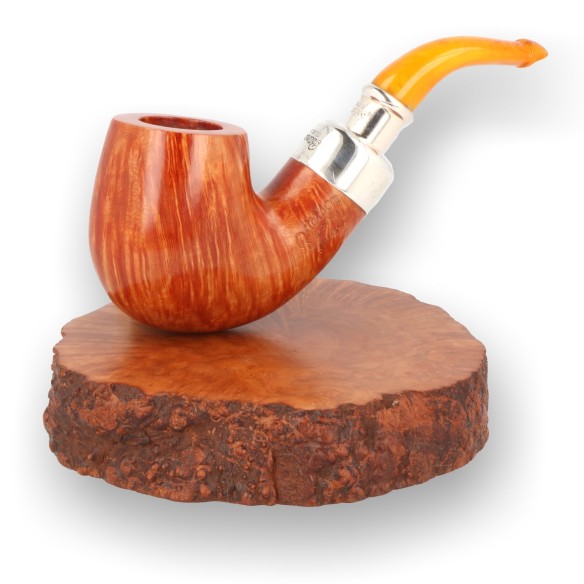 120 (3 of 5) orifice button: probably the earliest-made amber in the gallery 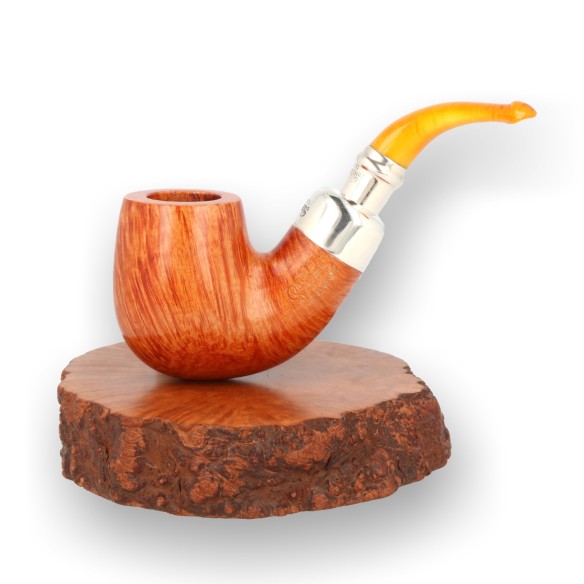 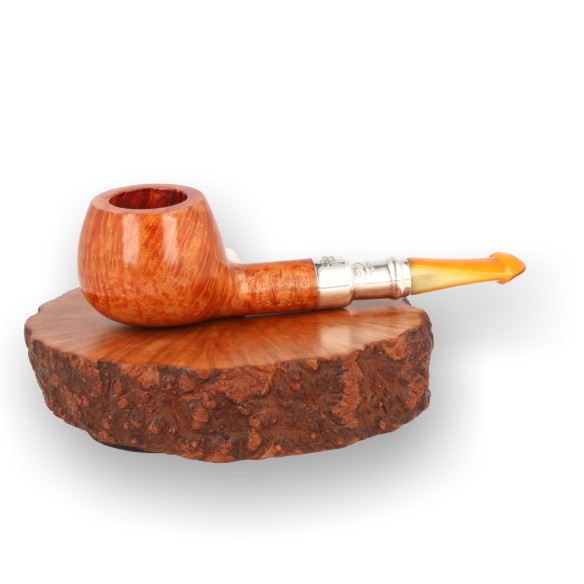 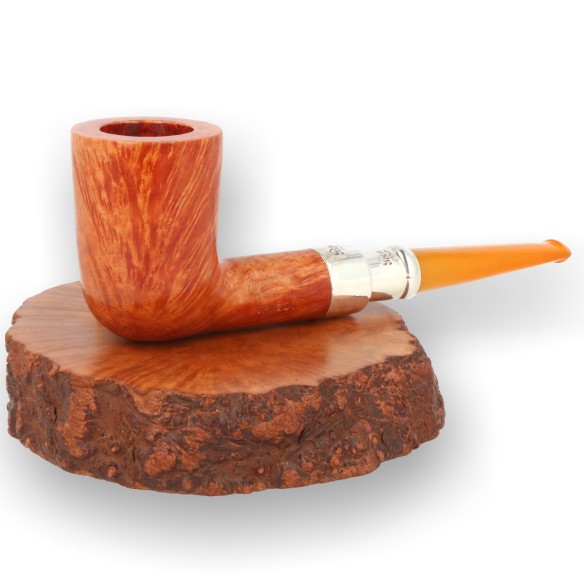 This release of the amber spigots comes with a second mouthpiece, black acrylic fishtail. The first release in the U.S. came with no extra stem, while the Lubinski / Italian releases have routinely featured an extra acrylic fishtail spigot mouthpiece. As expensive as the extra spigot mouthpiece makes the pipe, I think I would’ve preferred that if I was going to invest in one of these beauties. I wouldn’t let that stop me, of course, if I wanted one, as Peterson is willing to make an extra spigot mouthpiece for a very reasonable price. Kris said with this release there’s a new padded, hinged box:

I know some folk have been a bit hesitant because of the hoop-lah over the fragility of the amber. There are still lots of vintage Petes in circulation with amber bits, some with quite a bit of dental chatter, and of course as a semi-precious “stone,” amber is brittle. But it’s not more brittle now than it was when Peterson craftsmen originally formed it, and there’s loads of advice on how to take care of it and bring back its luster if it gets a little sun (a drop of olive oil and a silver polishing cloth). But if you decide to invest, I hope you’ll take my old friend “Trucker” Chuck Wright’s advice: “it’s just a piece of wood unless you smoke it. Then it becomes a pipe.” Fumare in pace! 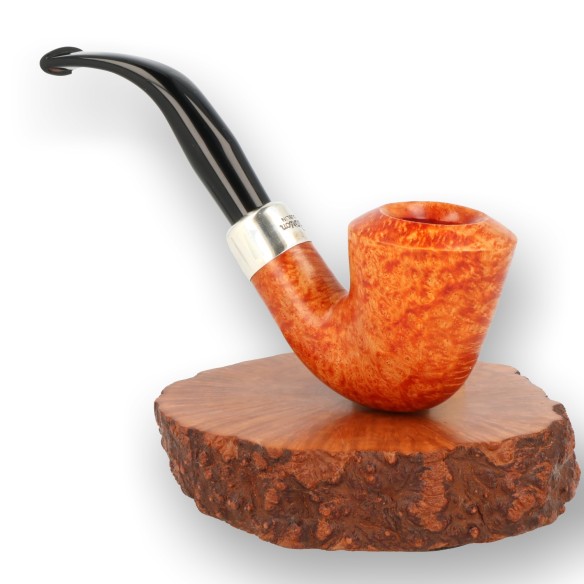 You can view available Amber Spigots from the Black Swan at
https://www.thebackyshop.co.uk/categories/peterson-briar-pipes-peterson-antique-amber-pipes

If you’re ever in Scarborough, be sure to drop by and introduce yourself to Kris Parry at the Black Swan Shoppe. If you click on the photo below, you can see a card of Peterson pipes in the upper right side of the window display.

* See https://petersonpipenotes.wordpress.com/2017/04/08/60-peterson-2017-product-catalog-a-well-kept-secret/.  Kris has several of the latest gen Platos in stock, as you can see. It looks like some have the new acrylic P-Lips, some still have the vulcanite P-Lips. “Worth a peek,” as the old duffer says.