In the past few years I have become enamored with the Irish equivalent of the English billiard—the straight dublin. I have heard some folk cavil against it for one of the very reasons I love it: its v-shaped chamber, which creates a more concentrated flavor as the bowl is smoked to the bottom. In my experience, this type of chamber requires the least number of relights of any bowl geometry and for that reason also trumps the billiard. That it is linked by name with Dublin (and so with Irish smoke) is yet another reason for my affection. Seriously, can you think of any other pipe shapes named for a city? (No, Bull Moose, Minnesota doesn’t count.)

The dublin shape name seems to appear with every other straight shape at the dawn of briar history in the last decades of the 19th century. The name suggests its origins, and you might think it has something to do with the dudeen or clay pipe of Dublin. No, and yes. 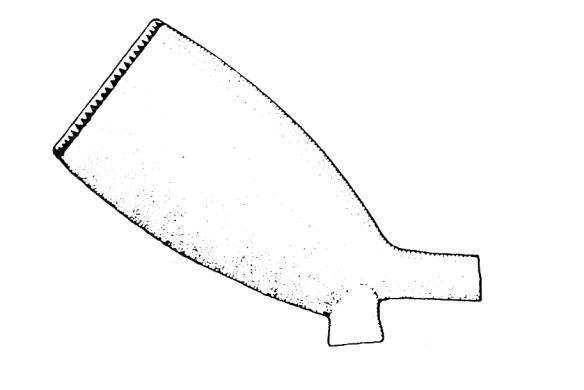 No: dudeen, also spelled dudheen, doodeen, and doodheen, is from the Irish Gaelic dūidīn, and is the diminutive of dūd, “pipe,” so that a dudeen is “a short tobacco pipe made of clay,” according to the Webster’s Third New International Dictionary, Unabridged. And “Dublin,” of course, is from the Irish dubhlinn (dubh = black and linn = pool). The dublin shape is common among clays, but not specific to the town of Dublin.

Yes: Somehow, quite early in the history of briar pipes, the shape name came to be associated with the town bearing its name.It doesn’t really matter, I suppose, whether it was a name used in an early pipe catalog or a name like the “dutch” billiard coined by servicemen. And if any pipe maker might be said to have proprietary rights to the shape, I’d say it would have to be an Irish maker, wouldn’t you? The Peterson book, incidentally, has some history about the Dublin clay pipe industry in the late 19th century as well as K&P’s own clay System pipes. 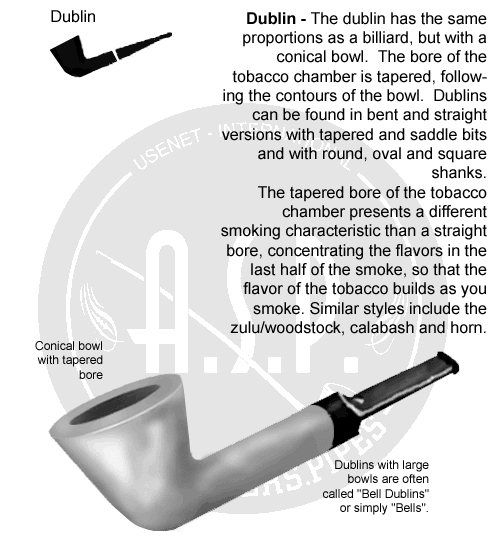 In the Fall 1998 issue of PipeSMOKE, Jacques Cole, one of the only writers to discuss shape names, writes:

The Dublin is probably the oldest briar pipe shape – like a cone, either slight or extreme – owing its origin directly to clay pipes. The reason for the name is quite obscure and no satisfactory explanation has been found. A variant of the Dublin is the obtuse-angled Zulu (sometimes called Yachtsman or Woodstock) and is made with either a round or an oval shank. A variation with an upright bowl and extreme cone is called a Bell Dublin.*

It’s significant, I think, that Peterson’s very first catalog contained the shape, if not the name. Remember that over the years, Peterson has only rarely added names to their shape numbers, although a few shapes have only had names. It’s also important to understand that Peterson has only attempted a comprehensive catalog of all the shapes in production five times in their long history (1896, 1906, 1947 and 1975/79), and even then omitted some shapes that were produced in such small quantities as to not warrant the printer’s ink. On the other hand, there is every reason to believe that there are a number of shapes that have begun production and then been in the catalog for decades, sometimes since the company’s beginning.

What follows is as comprehensive a visual catalog of Peterson’s dublin shapes as I’m able to present based on the literature at my disposal and the generally poor condition of what Poirot calls my “little gray cells.” This post surveys only the straight dublins, although I would like to document the heeled and bent dublins sometime in the near future. 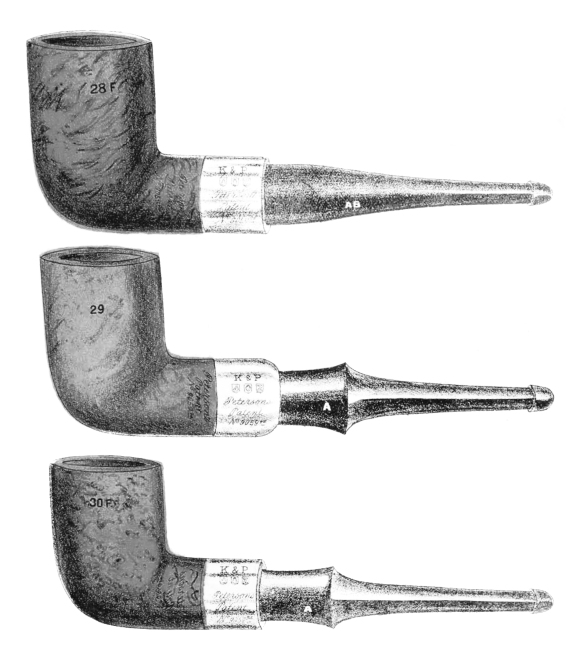 Straight Systems are fascinating pipes, and if you ever get a chance to smoke one, try it. I believe the 120 System re-entered the catalog quite briefly twice, once in the 1950s and then again in the late 1970s. They have three characteristics: they’re very dry; they have shallow bowls (as you can see in the demonstrator photo below), and they ghost easily, much as the current reverse calabashes, and so require care if not devoted to a single type of tobacco or blend. 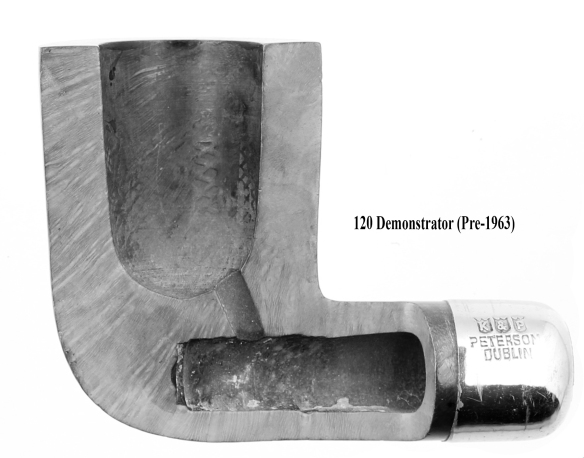 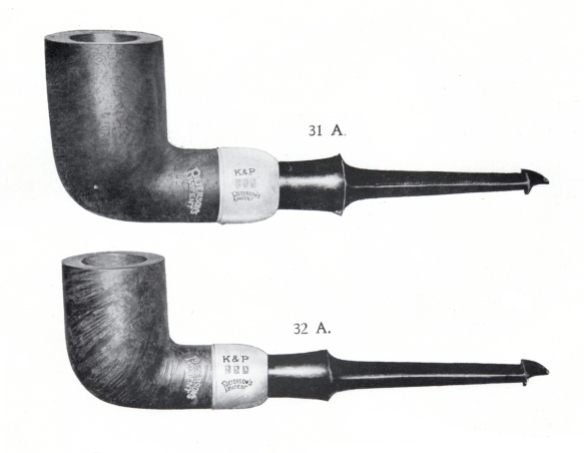 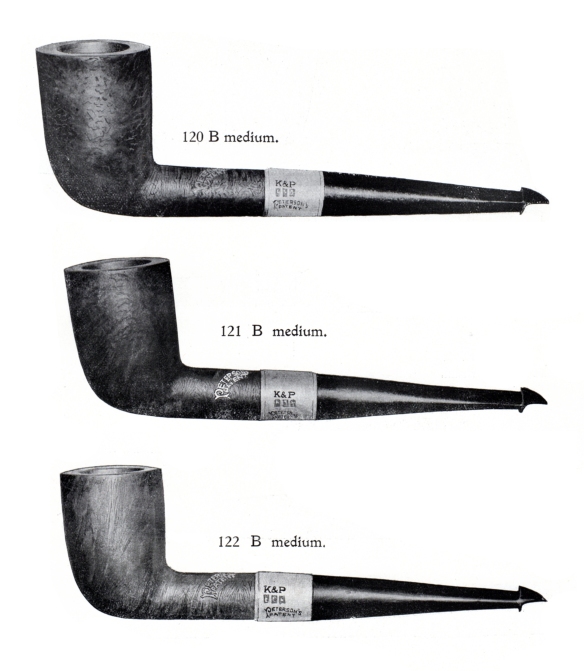 Far more important for later generations of smokers was the introduction of the Patent Lip dublin shapes, which with their traditional drilling at the side of the chamber’s floor allow for a conventional chamber size. The largest of the three, the 120, has been in production now for 112 years, but the 121 and 122 were both seen well into the mid-twentieth century.

The IFS-Era added two new straight dublins to the 120, 121, and 122: the 120F (“Flat” or oval shank) and slender 417. The System straights seem to have disappeared by this time. The 120F is a natural thought in Peterson’s design language, which always comes back to comfort and practicality, and I can imagine someone in bowl-turning or even a customer thinking how great it would be to set his straight dublin down in order to emphasize a point over a pint.

The first illustration of the 120F seems to be in the1937 “A Chat with the Smoker” pipe-box brochure issued not longer after Peterson opened their London factory. (It may well have been in production before then.) Examples of the shape appear as late as the 1965 catalog and may well have been made for several years after that.

The Éire Era produced two new dublin shapes. The first was a rarely-seen and gorgeous 935, illustrated here in the US-only Shamrock version created for Rogers Imports, Ltd. The 900 shape numbers are seen only in the 1937 catalog and a tantalizing chart in the 1942 George Yale catalog. As you can see from the average measurements (given at the bottom of this post), the 935 is smaller than the 120. 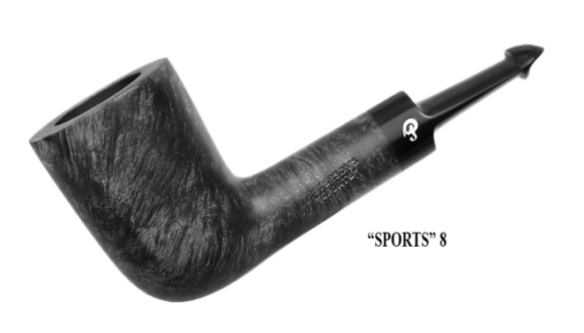 The other Éire dublin came at the end of the era in the 1947 shape chart as part of “SPORTS” line’s shape 8, a pocket-pipe version of the 120.  This line was created using used popular bowls, then shortening the shanks and mounting them with tiny P-Lips (aside from the original bulldog shape 5). Italian smokers continued to order the “SPORTS” pipes well into the early 21st century and they are still sometimes available in the US.

Peterson created no new variations on the dublin shape for most of the Republic Era (1949-1990), although one magnificent example appeared in 1988 at the very end of the Late Republic-Era as part of the 988-1988 Dublin Millennium pair of commemoratives. It is a unique and aggressive shape with its forward-sloping chamber jutting out like a ship’s prow from the famous Harland and Wolff shipyards in Belfast. While neither the current nor former factory managers (Joe Kenny and Tony Whelan, Jr.), nor Doris Barrett, could recall a catalog number, the intrepid Jim Frenken spotted the number on a German eBay listing, XL88S. Here’s one of the photos: 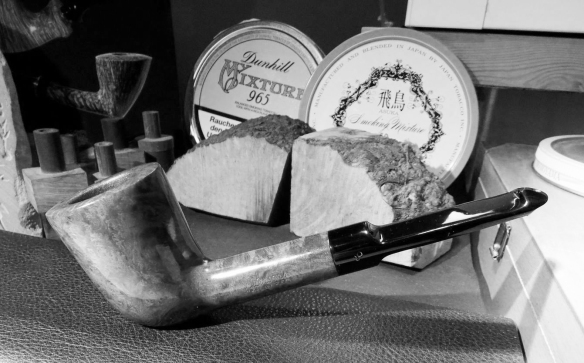 Tom Palmer’s Dublin era saw no less than four new dublin shapes as well as a bell dublin and a handful of bent dublins. It is significant that these shapes followed 1988’s Millennium with its almost futuristic or Italian sensibility yet began with the 1995 shape A4 dublin Antique Reproduction. In hindsight, I think Peterson was making a de facto statement about the importance of the dublin shape to its catalog. 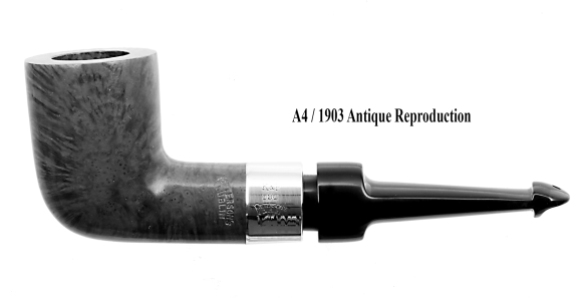 The A4 is one of my favorites in Peterson’s dublin group, originally issued as the 1903 Antique Reproduction in the quartet of four shapes from 1995. It was doubtless inspired by an engraving with just this mounting from the 1906 catalog (which you’ll see in the Peterson book).

As a reproduction, the A4 is a fascinating, even remarkable piece. Folk unfamiliar with Peterson history might easily enough mistake it for the real deal. The thick shank makes it an obvious homage to the shape 31 Patent System seen above [not to be confused with the current-production System 31]. And it scores perfect marks for the high-fidelity S (saddle) Patent-Lip System mouthpiece with its graduated bore and build-in (rather than screw-in) extended tenon seen on mid- and lower-grade Patent Systems. But it’s not a System pipe. Instead, Peterson designed it as what we call in the book a type of “sub-System”—a long-standing Peterson design concept—the graduated bore P-Lip mouthpiece will keep a straight pipe’s air hole much drier, but by forgoing the reservoir, allow for a deeper chamber (20mm x 42mm). And that, in my opinion, is all to the good.

The B16 is the Big One in Peterson’s shape group, the largest of all production dublins, and appropriately so as it honors Tom Crean, the “Irish Giant” who was pictured several times smoking a Peterson dublin. The B16 was issued as part of my all-time favorite Dublin era special collection, the Great Explorers, which came out in 2002.

In 2010, Peterson released its most visually extreme straight dublin shape, the aptly named ‘Wilde’ or B47 from the Writers Collection quartet. The narrow waistline of the bow and cant of the rim gives the shape the quasi-optical illusion of a dublin bell, accentuated by the slightly downturned mouthpiece. It’s still a straight dublin, but it has become much more fluid. 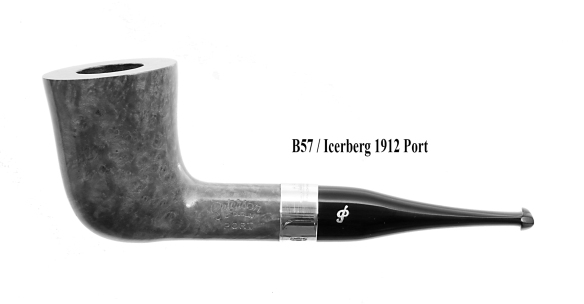 Peterson has always been a bit secretive about who designed what shape. Apart from Charles Peterson’s originals in the 1896 and 1906 catalogs and several Paddy Larrigan originals, only a few shapes can be traced to specific designers, as you’ll see in the Peterson book.

But whoever designed the Titanic centenary collection, released as the Iceberg 1912 quartet, did a remarkable job evoking a maritime feeling. The B57 / Port takes the classic dublin shape and cinches it slightly at the waist. It is almost (but not quite) the same shape as the B47, being a little thicker around the waist and with a straight mouthpiece.

*From “PipeSMOKE’s Guide to Pipe Shapes and Styles,” Vol. II, Issue 2, Fall 1998. This was on-line a few years back, but doesn’t seem to be available any longer. Cole’s article was taken from a chapbook he wrote, Briar Pipe Shapes and Styles: Pipe Line Guide No. 1 (Park Hill Publications, 1990), 38ppgs. Gene Umberger kindly forwarded me the entry for “Dublin,” which appears on p. 8:

“The DUBLIN is most probably the oldest Briar shape, owing its origins to the traditional shape of the simple Clay Pipes. Some of the earlier Dublins were found also with the ‘heel” under the bowl. Modern conditions are not encouraging for the maker to turn this type and the Dublin has had its ‘ups and downs’ in popularity. Between the last Wars, it virtually disappeared from some catalogues. In Western Germany, after 1945, pipes were small to contend with the shortage of tobacco, but when larger shapes began to be once more required, the DUBLIN was one of the first to be asked for. You will find a number of derivations centered on the stem, and the most popular of these is perhaps the ZULU, sometimes called YACHTSMAN. Usually produced with an oval stem, it is also made with a round shank. A fairly long ‘all-square’ can be rather pleasing.”