I happened on a Peterson-branded 3-in-1 pipe tool a few months ago and sent it to my Dad, who said he loved it: the heft, the utility, the design. I’d been using my Gratis with Peterson’s Patent System Pipes 3-in-1 for several years and couldn’t see how the new one could beat it. I forgot about the new one until Kerry at the Black Swann sent me one with a Peterson I’d ordered. I took the new tool with me to the Chicagoland Show, not wanting to risk my old Gratis tool and found myself falling in love with it for just the reasons my Dad enumerated.

I saw the same tool for sale at the Chicago show, but without the Peterson branding. When I returned home, now pretty enthusiastic about it, I got in touch with Conor Palmer, commercial director at Peterson, to ask whether it was something proprietary or not, and how long the company’s been offering it. He replied:

That pipe tool has been around for a number of years—I’m going to say at least fifteen. There is no difference between the one that is branded Peterson and the plain one without any branding – There have been a number of occasions when the tools arrived to us without the branding when we asked for it to be branded (!), and as it’s sourced in the Far East, it’s simply not worth our while sending them back.  In fact, the specific shape of pipe tool isn’t unique to Peterson and I believe there are others using it.

We use them primarily for promotional purposes (such as with a high-grade pipe) but they are also available for sale with any distributor and in turn retailers.  The problem is that there are plenty of varieties and options on pipe tools and more often than not its some locally-sourced tool that people go for on account of cost. 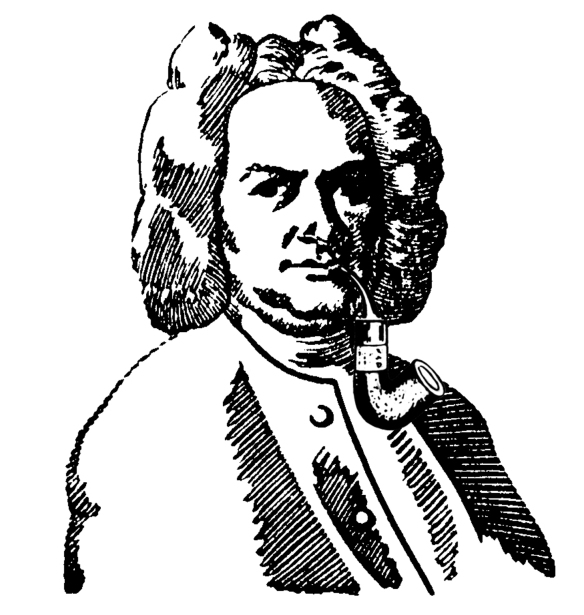 Now as long as there have been pipes, there have been tampers. If you haven’t used your finger as a tamp, you probably haven’t smoked more than a bowl or two, because along about the second or third burned finger, you learned to keep a tamper handy.

In the beginning (as you may know), tampers were called “stoppers,” and Johann Sebastian Bach (a man who loved his pipe), had this to say about them:

How oft it happens when one’s smoking:
The stopper’s missing from its shelf,
And as one goes with one’s finger poking
Into the bowl and burns oneself.
If in the pipe such pain doeth dwell,
How hot must be the pains of Hell! *

By the mid-19th century, well before briar became the norm, smokers seemed to have arrived at a consensus that there’s three basic operations that may need to be done while smoking one’s pipe: (1) the aforesaid “stopping” or “tamping,” (2) clearing clogs from the draft hole with some kind of pick and (3) unloading smoked or unsmoked tobacco from the chamber.

Charles Peterson, who was not only a great inventor and carver but a guy who smoked like a freight train, knew from the get-go that his pipes, and particularly his Patent System, needed to be clean to function correctly. Accordingly, K&P provided tutorials in both their 1896 and 1906 catalogs. But realizing that charity consists more in actions than good advice, the company followed up by providing every single Patent pipe they made with a “Gratis with Peterson’s Patent System Pipes” 3-in-1 pipe tool, and did so until sometime in the early 1960s. 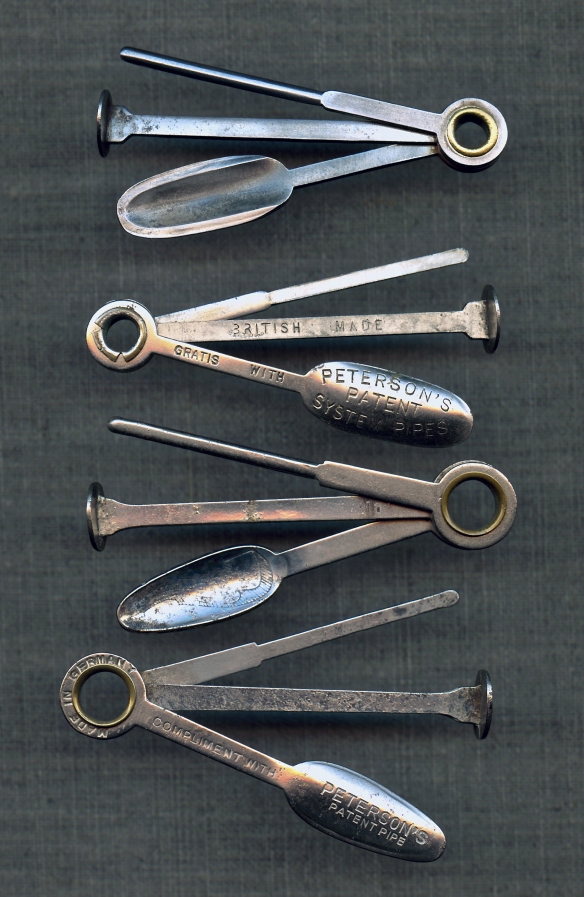 As those who frequent the Peterson listings on eBay have probably noticed, these tools keep turning up, most in remarkably good condition, usually stamped BRITISH MADE, but once in awhile (as seen above) with a MADE IN GERMANY around the ring.

From K&P’s end, after “The Thinking Man” icon and logo, it was undoubtedly the best advertising they ever did: every time a pipeman picked up the Gratis tool, he remembered his System pipe.

The Gratis pipe tool is known these days as a “Czech Tool,” because all the good ones say MADE IN over CZECH REPUBLIC on the tamp stem (and representing fully 1/3 of that nation’s export economy, I am told by unreliable sources). But as my eye strayed from my Gratis Tool to my Czech Tool, the thought finally occurred to me that maybe the Czech Tool really ought to be called a Gratis Tool, since Peterson’ version dates all the way back to the 1896 catalog.

Now I’d like to be able to say that Charles Peterson invented the thing, but as it turns out, the 3-in-1 had been around for a good while before the System pipe.

One of the first patents I traced for a 3-in-1 was by Gustavus Matile, and dates from 1864. In his patent letter he writes that “it is well known that devices of similar kind have been used long since by smokers; but they were not so complete as mine, and they lacked the spring, which constitutes the essential part of my improvements.” He may have learned about the spring from the Aubrac folding knives of France, which had been around for thirty years by the time of his patent.

I found another 3-in-1 pipe tool patent from George Walker, of Newton, Massachusetts, filed in 1905. Like Miller before him, he states that the three parts of the tool “are well known to pipe-smokers,” his patent covering a fourth tool, a flexible cleaning rod concealed in the bore of the tamp (#6).

One of the great gurus of the hobby in recent years has been Fred Hanna, and if you haven’t read his deliciously satirical essay on “The Hidden Benefits of the Expensive Pipe Tamper,” I suggest you immediately do so. You can find it in his book The Perfect Smoke (2012), or at the TobaccoDays blog at http://tobaccodays.com/2015/07/the-hidden-benefits-of-the-expensive-pipe-tamper-by-fred-hanna/ .

Hanna seems to be able to get along with just the tamper, with no need of either pick or spoon. There will be those who suspect he wasn’t brought up with tools or say he doesn’t go in for the manly D-I-Y aspects of the hobby. But they’re wrong. It’s because he is a kind of Jedi Knight of the pipe-smoking world and never has clogged airholes, never packs his pipes too tightly, and certainly never finds his straight-grain artisan pipe’s chamber with ash clogging the unsmoked tobacco beneath.

If you’ve looked at all at the expensive tamp market, you’ll notice there is what I would call a “double-function” tamp, made rather like a sword-stick, with a tamp and a screw-out poker. And you might think that Hanna occasionally sneaks out the poker to unclog the draft hole. Fie! Not likely.

While anyone who’s encountered the frustration of a clogged draft-hole knows the value of the poker, only army-mount and System users have the ability to actually remove the mouthpiece during smoking and unclog the draft. All others—that is, most of the smoking world—have to set down their traditional mortise-and-tenon “navy mount” pipe until it cools and go pack another pipe, perhaps more carefully this time.

I, on the other end of the world from Mr. Hanna, am one of those poor sods who often enough packs his tobacco too tightly, and so must sometimes scoop it all out and begin again, or through some malignant agency find the airhole clogged and unable to draw about midway through an otherwise perfectly idyllic smoke. I couldn’t live without the poker.

At the Chicago show, my co-author Gary Malmberg taught me a trick with the poker that I’m sure everyone in the hobby knows but me, but in case there’s just one guy who doesn’t know it, allow me to share it here. (Everyone else just take a breath and skip over the next paragraph.) This tip is for those who routinely smoke their bowl of tobacco down to the bottom, not for those who smoke the top third or half, then set down the pipe and are done with it, or empty out the dottle to smoke another day, Sherlock Holmes-fashion.

When I get about 3/4ths the way through my smoke, it inevitably happens that I tamp the surface, but can’t get a good relight. I poke my finger down and can tell I’ve still got a quarter of a bowl or more left, then try another three or four relights. When Gary saw me doing this, being the wise man he is, said, “That’s one of the reasons you’ve got a pick in the 3-in-1 tool: take the pick and gently poke two or three air holes down through the layer of ash and the tobacco beneath to the bottom of the bowl, being careful not to push the pick into the chamber floor.” Well, I tried it, and presto, as they say. Problem solved. Merrily I smoke along, until I’ve smoked the bowl to the bottom.

I think Charles Peterson liked the 3-in-1 because he knew that sometime, someplace, it was going to be needed. I don’t know if he was a boy scout back home in Riga, Latvia, but you get a sense that “Be Prepared” was not an unfamiliar notion to him.

One could wish the tradition hadn’t ended in the early 1960s, and Peterson Systems were still packaged with this fine old tool. I’ve suggested as much to Peterson—and how cool would it be if it were made in Ireland rather than the far East? 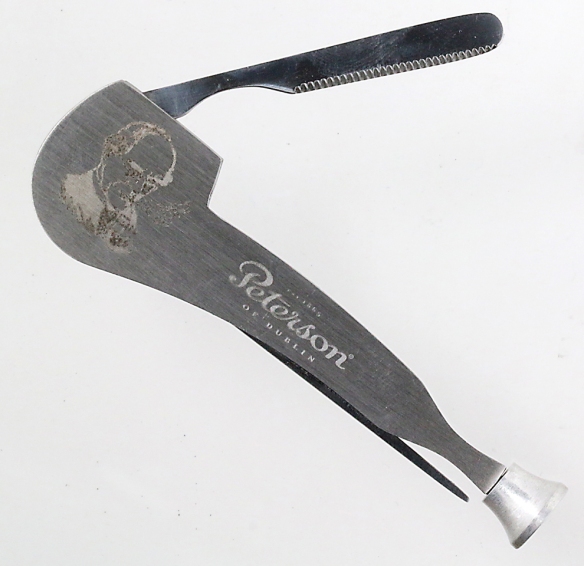 But for all that, Peterson’s more recent branded version of the 3-in-1 is actually a step above the old one, even if it is almost as hard to come by. There’s a few places in Europe that sell them, and a few that offer them as a promotional gift with the purchase of a high-grade Pete. The tamper base is a good size, the pick is longer than the old Gratis tool (a good thing), and the reamer serves just as well as the Gratis shovel / spoon with the additional bonus of the slight serration for lightly reaming unwanted carbon. The stainless-steel sides, which accidentally resemble the 406 and 408 catalog shapes, give the whole thing a decent heft. They also give your fingers something to hold onto while tamping, which neither the old Gratis tool nor most of the expensive tamps I’ve seen do.

I’m a little surprised that Leatherman hasn’t come out with it a version that also includes a bottle opener (useful for us craft-beer types) or wine bottle corkscrew (for our French counterparts) along with a few other useful items. But until they do, check out the ne plus ultra 3-in-1 Laguiole Calumet (with briar handle) from Aubrec in France. I don’t know if it’s still in production or not, but they still list it on their official sites:

It’s not inexpensive (about $180 if you can find one), but the craftsmanship is impeccable, the beauty is beyond compare. Like a classic Peterson pipe, it’s got loads of history behind it, including the story of the bee engraved on it as well as the shepherd’s cross (see the little dot-thingies in the shape of a cross in the handle?), which I won’t spoil for you. You can find out more about the remarkable history and production of these knives in a video at https://www.youtube.com/watch?v=pvnKaFFA8qc.

Thanks to Chas. Mundungus for
“The Thinking Man Smokes Bach’s Pipe”
and to Smokingpipes for the photo of the Laguiole Calumet.