In late December, Smokingpipes.com received about 30 or so new Peterson vintage amber spigots. By the time I found out about them later in the day, all but four had sold. But recently Conor Palmer, commercial director at Peterson, sent me several photos of these pipes, leading me to wonder if more may hit the internet at some point in the near future. Maybe Peterson just wanted to mark the occasion and had their photographer in that day, but my hunch is that there’s a few more that will be on the market. Either way, I thought I’d post a few of the photos he sent and tell you a little bit more about Peterson’s history with amber mouthpieces.

I won’t repeat what Sykes Wilford and Andrew Wilkes have already written, so you might first want to head over and read what they have to say at https://www.smokingpipes.com/smokingpipesblog/single.cfm/post/amber-stems-and-petersons-amber-spigot-line. Their words of caution for prospective owners are all to the good. 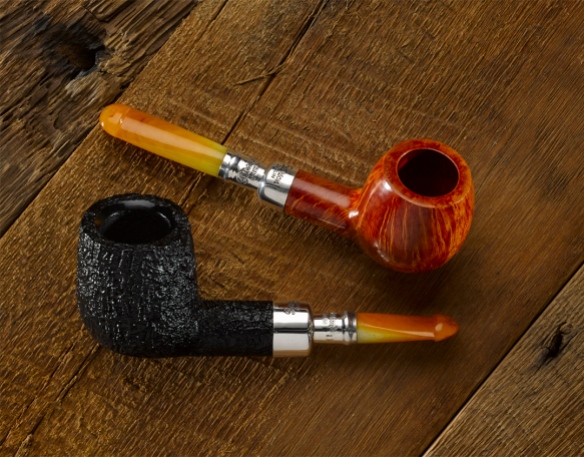 You’ve probably run across vintage amber-stemmed Petes on eBay and elsewhere, and invariably you’ve found a beautiful old pipe with a broken stem. Arguably the most beautiful mouthpieces ever made for pipes, amber isn’t as durable as horn, and much more brittle. It was bought in lumps (seen in one of the 1906 catalog photos on the bench in front of Chalres Peterson) and worked by Charles and his right-hand man Jimmy Malone into P-Lip mouthpieces until shortly after the Great War, when amber prices went through the ceiling.

Soldiers returning home weren’t nearly as interested in the prestige of an amber stem as they were—quite understandably—in durability. You’ve only got to look at some of the pipes they brought home from that war and the Boer Wars before it to know what I’m talking about. They wanted something that could take quite a bit of abuse, and amber just wasn’t it.

Nevertheless, although Peterson quit advertising amber stems, they still had enough call for them to have purchased the raw material and worked the stems until at least 1939—according to the sale receipt found early last year when the Smokingpipes folks were poking around at the factory.

Smokingpipes weren’t the first to stumble upon stores of amber at the factory, nor the first to have them made up into pipes since Peterson quit offering them. That story will have to wait for the Peterson book. But the beautiful idea of sheathing the delicate stems in a spigot is something that hasn’t been seen from Peterson in the last century.

On most of the pipes I’ve seen, the stems do seem short—an optical illusion caused by the fact that they likely weren’t intended for spigot treatment. It’s also possible they may have been intended as “tubes,” or cigarette holders, but could just as easily be adapted for pipe stems. In either case, as any aficionado of Nose-Warmers can tell you, a short stem doesn’t mean a hot smoke.

Amber is not for clinching, being harder than either horn or acrylic, but as most of us (at least here in the U.S.) are getting used to the idea of acrylic, the experience shouldn’t be too dissimilar. If you’ve bought any of the recent vintage Ropp horn-stemmed pipes, you’re getting closer to what amber will be like.

While the original P-Lip mouthpieces had a graduated bore, I don’t know if Jason Hinch (silversmith at Peterson) has been able to preserve the graduation or not. It is theoretically possible to make a P-Lip spigot, as I have a P-Lip vulcanite spigot made for me by his predecessor David Blake. My own Peterson spigots do seem to smoke a bit wetter than regular P-Lips, but that’s in no way a complaint, just an observation worth passing on.

If they appear again on the market, you can expect to pay around $340 for a natural finish high-grade bowl, or a bit less for a brushed black rustic. If you’ve got deeper pockets (about another $100), there are still a few sites on the Italian market where, quite sensibly, you can get a natural high grade bowl made up with two spigot mouthpieces—one amber, one vulcanite. At either price, not a bad investment to companion a piece of Peterson’s earliest history!