Lá fhéile Pádraig sona dhuit! Happy St. Patrick’s Day to you, whenever you read this! 2020 marks the 22nd  anniversary of the St. Patrick’s Day commemorative pipes for Peterson, and if you’re wondering where it came from and where’s it gone, here’s a visual history of the series along with a few notes.

Tom Palmer, who was CEO during Peterson’d Dublin Era (1998-2018) had an idea for an annual pipe 1997, when Peterson released its first Limited Edition / Pipe of the Year. The following year the company decided to add two annual commemoratives, a St. Patrick’s Day and a 4th of July. While the 4th of July pipe has long been gone, the SPD has given Kappnists (or Pete Nuts) many great pipes over the years, with none perhaps quite as marvelous as this year’s 20th anniversary 2018 and the original 1998.

The price-point of the series is at the solid entry-grade of the Classic Range, roughly equivalent to the Aran line in most years (with some exceptions). Another distinguishing feature of the series is that in many years during the Dublin Era a shape (or even two or three) from a special collection or high-grade series—think the Antique Collection for the former and the Sherlock Holmes for the latter was often featured. Every Peterson high-grade issue has bowls that aren’t of sufficient quality to make the cut but must be used, and often these feature some fantastic grain. For most years, the series has offered 12 shapes.

We know the series began in 1998 because Brad Weinfeld of SAG Imports was working for Hollco-Rohr, Peterson’s US distributor at the time, and during the course of our research on the Peterson book he took the trouble to send us the final sales catalog of that company, dated July 15, 1998. If you click on the image, you can see the SPD and 4th of July annual commemoratives described as “NEW,” as well as their wholesale and retail prices.

The series began auspiciously enough, with a brass and acrylic sandwich band of the Irish colors and P-Lip. For this and most of the years, I don’t know which shapes were released, although they were for the most part taken from Classic Range shapes.

Two of the three images of purported 1998 SPDs I have show a light, matt finish. Seen above is the unique bent shape from the 1997 Racing Green / Claret limited editions. I can’t give you the shape number, because there wasn’t one stamped on the only Racing Green I have handled.

I also have a photo of a 107 SPD, probably with its original box and sleeve, with a stain that matches the RG: 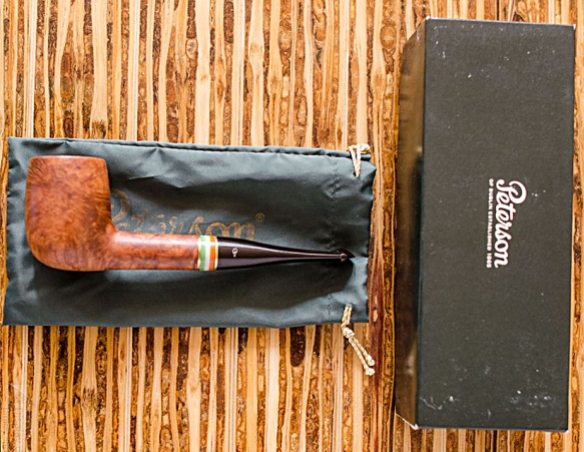 As you can see from the two representatives, the 1998 SPD was released with a P-Lip. The mouthpieces featured the white impressed P standard at the time. 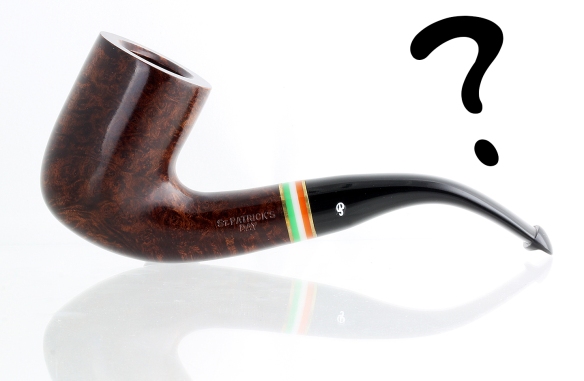 I once had an XL20 SPD (seen above) with a dark gloss finish and the tricolor acrylic and brass band. I assumed (at least until now) that this was a first-issue SPD for 1998. However, I have been able to find no trace of a documented SPD for 1999, nor indeed any pictures at all for this year. I’ve asked Peterson and searched all the usual places but come up empty-handed. Jason Canady, CPG, has one of the world’s only complete collections of the SPD pipes and through his research and collecting on display in PPN #275, we know there there wasn’t a 1999 SPD.

The Rare A3 from the Original Antique Collection

In 2000, the SPD series settled into a familiar and long-running guise: some variant of brown-hued smooth bowl and a nickel band with Peterson’s over a shamrock over March 17 and the year. The 2000 SPDs also featured the beloved P-Lip vulcanite mouthpiece. Shown here is what must have been the collector’s piece, the A3 shape from the first Antique Reproduction series. 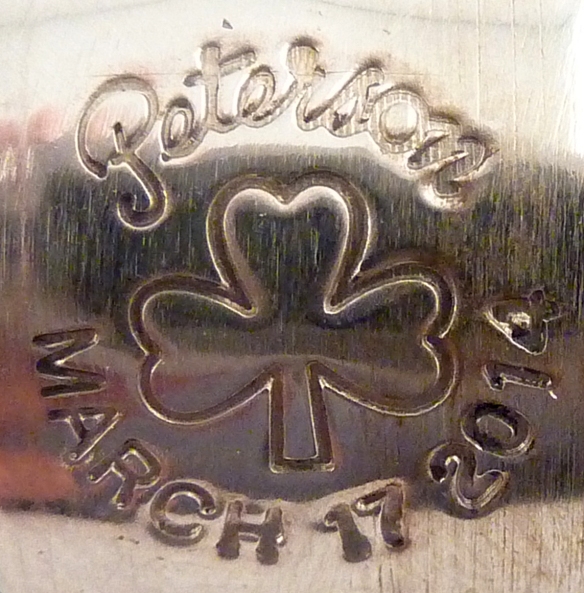 In 2001, the SPD lost its P-Lip, never to return. Peterson seems to have changed directions at about this time, giving in to market pressure on the one hand and (perhaps) a lack of interest in promoting the P-Lip on the other. I say this based on my own hunches from research during the course of the book, and while a company must remain viable to survive in the marketplace, from a historical point of view at least, it was unfortunate. 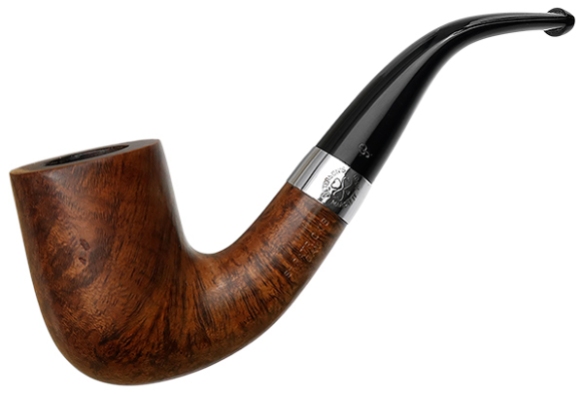 The collector’s piece for 2001 (again I hypothesize based on the assumption that there would be only one special shape for the year) was again the Return of Sherlock Holmes Rathbone. 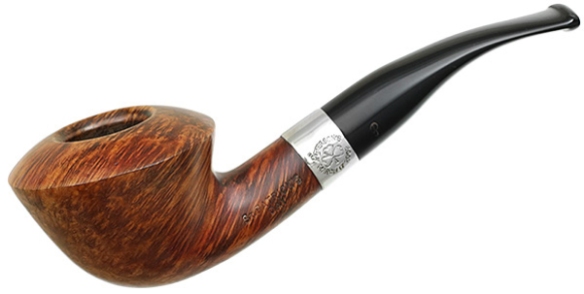 I would guess that the fabulous B7, pictured here, was 2002’s collector’s shape. 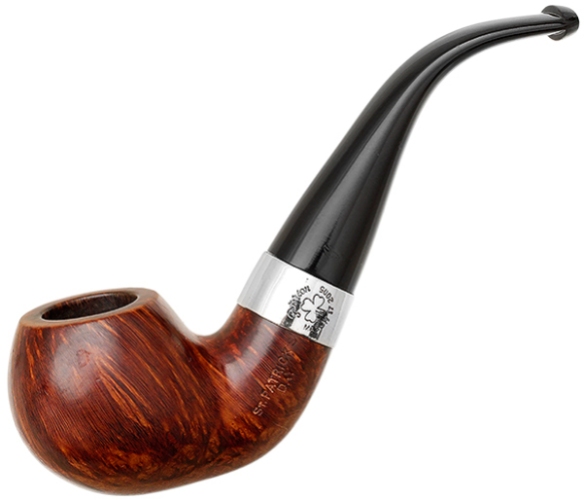 An unusual entry for the series from the Classic Range, the 68 brandy—this is a real handful of a pipe, absolutely magnificent to hold. More on the shape soon! 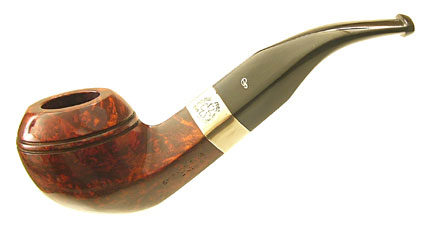 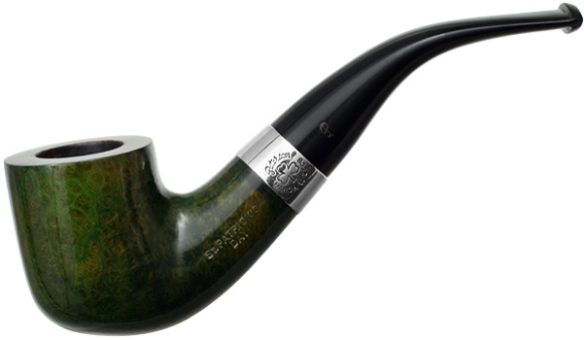 2008 was the first year of Peterson’s green SPD releases. I’ve included two illustrations to give you some idea of what you can expect. Craftsmen at the factory have told me they had a hell of a time in the beginning figuring out how to do a really good green.

Here’s the undoubted collector’s piece from 2009: the oversized 502, from the short-lived 500 shape group. See what I mean about the spectacular grain sometimes found in the SPDs? Simply amazing.

Here’s a bulldog, Irish-style! The now deleted B2, for all fans of heavy (in looks, not weight). This might well have been the collector’s shape for 2010. . .

. . . except that there’s also a fabulous B30! Maybe the exception proves the rule?

The mighty 107 makes another appearance in the SPD series. Christopher Lauer discovered the decorative sleeve for 2012 and sent it along:

It’s my favorite of all the sleeves I’ve seen thus far.

As you can see from the 2013 electronic strut card, there were actually three special shapes released in the 2013 SPD (the B35, B58 and B60), one of the most remarkable in the series’ 20-year history, not merely in the shape selection, but also in the smoky-matt finish.

The amazing B58, the “rocking setter” from the Iceberg Collection, was widely admired among Kappnists at the time.

I don’t know when Peterson began putting sleeves on the SPD series, but this is the earliest I’ve sourced, from 2013. 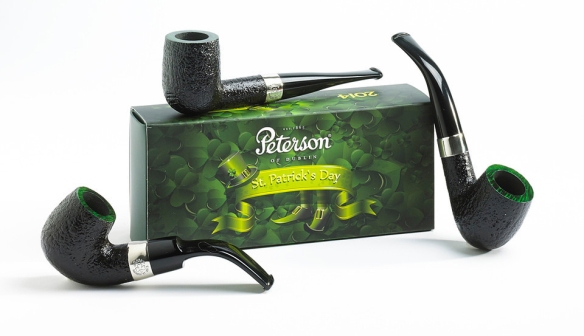 You can read all about the 2014 SPDs here., which were a sandblast gloss black with a green gloss smooth rim.

The 2015 box curiously omits the year of release!

The D19 (formerly LT or Large Tank) from the Mark Twain Collection was the collector’s shape for 2016.

Flattened sleeve for the 2016 SPD 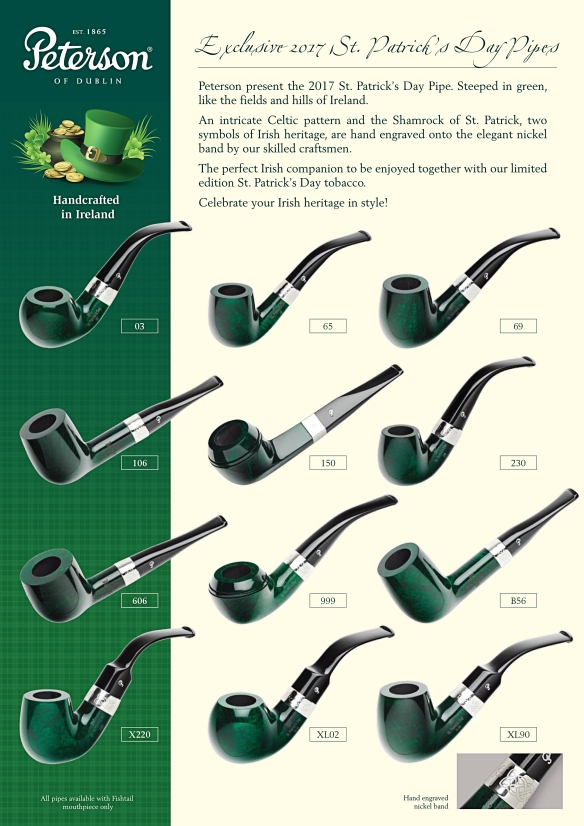 Electronic Strut Card for the 2017 SPD

2017 marked the third green SPD. The B56, originally the Adventures of Sherlock Holmes Sylvius, was the prize catch for 2017, signaling (in this case) the impending deletion of the Adventures of SH from the catalog. The Celtic laser-engraved knot was lovely.

At the 2018 IPCPR show, Tom Palmer said the 2018 SPD was intended to represent the Irish flag—the green (bowl), sterling band (white) and orange (mouthpiece). What better way to celebrate the 20th anniversary of the pipe? It remains the highest-end release in the commemorative series, and it really a matte finish (seen below), not glossy as the electronic strut card seems to suggest. Fantastic issue.

The first SPD of the Laudisi-era Peterson dropped a few jaws (mine, at least) with the first-ever P-Lip in the commemorative line, a full-blown St. Patrick’s Day System. It was released in nine shapes: nine System shapes in the Standard range: the 301 pot, 302 large apple, 303 apple, 304 flat-bottom, 305 calabash, 307 large billiard, 312 medium billiard, 313 small dutch and 314 small billiard.

The 2021 SPD featured a newer rustication, not quite the full-fledged treatment Wojciech Blaszczak will shortly develop, but still quite nice. Much to the joy of Pete Geeks everywhere, the pipes were also accompanied by the first of the Peterson leather pipe holders, this one in green with the fully-formed shamrock. Twenty-five different shapes were included in the initial release.

For 2022 SPD is a riff on 2021, an army mount stead of the “navy.” But I do like Blaszczak’s finalized rustication style. I think I have three of his pipes now in my rotation and all of them look as well as feel great while smoking.